The Minster has a number of trained guides who specialise in different aspects of our Minster life.

It is always possible therefore to ‘tailor-make’ your tour be it historical, educational, architectural, stained glass, Anne Lister etc.

Contact the Minster Office for further details on 01422 355436 or at admin@halifaxminster.org.uk

To enquire about hiring the Minster for an event please contact the Minster Office on 01422 355436 or at admin@halifaxminster.org.uk

A small gift shop is located near the main entrance of the Minster. It is open during visiting times and for special events. High-quality gifts and souvenirs can be bought to remind you of your visit or for family and friends.

Garry Knapton is the Volunteer Shop Manager and can be contacted at shop@halifaxminster.org.uk

Click HERE and ‘At a glance’ you can see and read a number of newsletters and other articles on a whole range of topics. 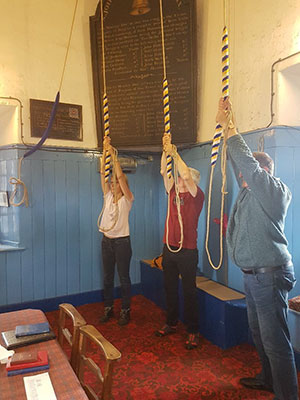 The large West tower contains a total of fifteen bells. Fourteen of these are hung for full circle ringing which allows the bells to be rotated 360 degrees clockwise and anticlockwise. The tower also contains a small ancient bell from around the 16th Century but the markings have worn off, so it is difficult to date exactly when it was cast.

It is now just hung for swing chiming and is used as a ‘Sanctus’ bell operated by the clergy during the communion service.  Thirteen bells were cast in 1951 by Gillett and Johnston foundry in Croydon, London. The metal was reused from the older bells installed in the tower over the previous 300 years. These bells were considered to be of poor tonal quality, so the decision was made to recast the whole ring. During 2005 an additional bell was added, cast by John Taylor bell foundry at Loughborough, which allowed lighter combinations of the bells to be rung.

The largest bell weighs 28cwt which is just short of 1.5 tonnes and the whole ring is tuned to the key of D major. As the note of the bell gets deeper the bells increase in size giving a weight range from the lightest, highest note at around 300kg gradually increasing to the heaviest, deepest note at 1429kg. The largest single bell is used by the clock mechanism to strike the hourly chimes.

The bell ringers meet every Friday evening from 7.30pm to 9.00pm for practice and ring for the 10.30am Choral Eucharist on Sundays. We are also called upon to ring for weddings and funerals, and for special services and events throughout the year. We are always looking for new members to join our team so if you are looking for a new hobby please contact the Minster to find out how to get started.

Make the most of your time in Calderdale! Please click on the link below to explore the other visitor attractions within a short walk of the Minster, across Halifax and throughout Calderdale.

What’s on in Calderdale?